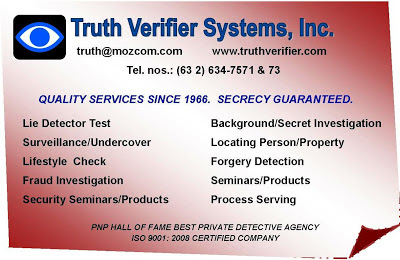 Posted by Truth Verifier Systems, Inc. at 2:09 PM No comments:

STOP - Don't Hire Them Yet! 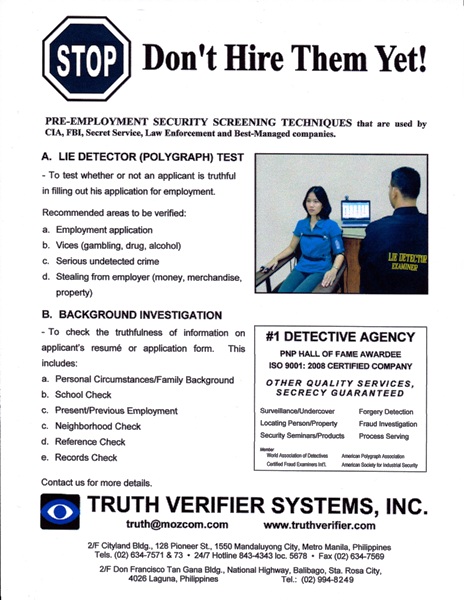 Posted by Truth Verifier Systems, Inc. at 8:40 AM 1 comment:

Seminar on Assessment of Human Performance by Lie Detector at Philhealth

TruthVerifier Systems, Inc. Polygraph Consultant Essam Aly Gamal Eldin shared his intellectual wealth as a resource speaker on “The Assessment of Human Performance by Lie Detector” during the Training on Strategic Anti-Fraud Tactics and Basic Statistics conducted by the Fact-Finding Investigation and Enforcement Department of Philhealth that was held at the Fontana Clark, Angeles City, Pampanga, Philippines on December 10-13, 2012.

This training is one of the national events of Philhealth in which the participants were representatives from the Legal Department of all Regional Offices all over the country. This is another project of the organization to promote fraud awareness and how to detect and prevent such wrongdoings within the group. Furthermore, this event underlined the role of each employee to embody the ethical standards and uplift the integrity of the employees.

Dr. Leo Douglas V. Cardona Jr., MD, CSE, Regional Vice President and Head of FFIED, highly appreciated the invaluable participation of Truth Verifier Systems, Inc. in the said event. He and his colleagues expressed their willingness to strengthen unity in the detection of various fraudulent violations using the tactics and basic statistics imparted to them.

This kind of speaking engagement is one of the paces of TVSI President Capt. Conrado G. Dumlao in his advocacy to detect, deter and prevent fraud and deception in the workplace by educating the public about the vital role of the people to totally eradicate such inimical activities. Capt. Dumlao is an active examiner and resource speaker on lie detector test. He is also a member of the International Liaison Committee of American Polygraph Association (APA).

The speaker, Gen. Essam Aly Gamal Eldin, is a proficient examiner in the field of lie detection. He is also the Assistant Director for Academy for Scientific Investigative Training (ASIT)-USA. He has made successful lectures and seminars for the Academy in the Kingdom of Saudi Arabia, United Arab Emirates, Dubai, Jordan, Republic of South Africa, The United Kingdom, United States of America and Singapore. He has attended numerous advanced courses in Forensic Psychophysiology and is a Certified Primary Polygraph Instructor by the American Polygraph Association.

On the other hand, Truth Verifier Systems, Inc. is noted to be first and leading lie detector and private detective company in the country. It is awarded by the Philippine National Police (PNP) as the Hall of Fame Best Private Detective Agency and is an ISO Certified Company. It is located at Unit 254 Cityland Bldg., 128 Pioneer St., Mandaluyong City, with telephone numbers (02) 634-7571 & (02) 634-7573 and Email truth@mozcom.com.  It has a branch office at 2/F, Don Francisco M. Tan Gana Bldg., National Highway, Balibago, Sta. Rosa, Laguna. For more details, visit us at www.truthverifier.com www.maniladetectives.com  & www.liedetectorphilippines.com

Posted by Truth Verifier Systems, Inc. at 8:16 AM No comments: 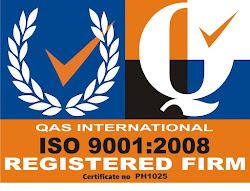